In this quick post, Coach Pete Thistle our GameSpeed Apprentice, drops some knowledge about the utilization of the standing medball chest pass.

The standing medball chest pass will be one of many implemented drills within the Trench Academy! 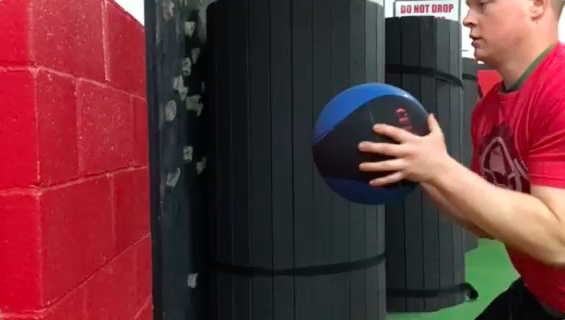 Standing Chest Pass: This exercise has been modified to more closely resemble a lineman’s movement in a game, specifically the 2-hand punch. Notice the ball is released straight ahead and not at all lobbed, forcing the athlete to produce enough force so that the ball doesn’t bounce downward when it hits the wall. Power comes in straight lines, which is why the elbows are tucked and drive in a linear motion.

Contrary to popular belief, there are a number of reasons to why the lineman should not pull the elbows all the way back:

• The punch should be short and efficient because there is often very little time for the athlete to respond to an opponent.

• Even if there was enough time, pulling the elbows too far back would expose the chest, making the athlete vulnerable to a counter blow.

• Every muscle has an optimal length-tension relationship (LTR), meaning that there’s a resting length of every muscle that can produce the most force. An easy example of this is to think of the bicep curl. Your arms have to work harder at the bottom and top of the exercise, but are stronger in the middle of the range of motion. Similarly, not bending the elbows enough or pulling them too far back will produce a weaker output. This exercise teaches you to find the sweet spot in between.